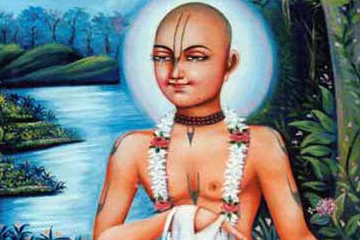 Shri Svarupa Damodara is an eternal associate and friend of Shri Chaitanya Mahaprabhu.
Previously his name was Shri Purushottama Acharya.

He lived in Nabadwipa.
He always stayed with Mahaprabhu.

When Shriman Mahaprabhu took sannyasa, he became half-mad.
He went to Varanasi and took sannyasa from a sannyasi named Chaitanyananda, who ordered him to study Vedanta and teach it to the people in general.
Shri Purushottama Acharya did not accept the dress of a sannyasi, but only gave up the shikha and sacred thread.
His name became Svarupa.

After this, taking up the order of his sannyasa-guru, Shri Purushottama Acharya went to Jagannatha Puri.
At that time, he again met with Shri Chaitanya.

His mystic awareness of the Lord’s inner purpose was deep and unfathomable.
He was an ocean of rasa.

In his previous ashrama, his name had been Purushottama Acharya.
When he was in Nabadwipa, he had attained the Lord’s lotus feet.
But when he saw the sannyasa of Shri Chaitanya, he went half mad.
And so, he went straight to Varanasi to take sannyasa.

In connection with Svarupa Damodara, Shrimad Krishnadasa Kaviraja Goswami has written further, as follows:
“Shri Svarupa Damodara was the limit of scholarship; still, he did not generally converse with anyone.
He kept to himself. He liked to remain alone, and did not see others.
He was the very embodiment of Krishna-prem.

He was like a second Mahaprabhu, in the sense that he fully understood the Lord’s conclusions on Krishna-tattva and Krishna-bhakti, and could fully represent them.

The Lord did not delight in hearing literature and song which was opposed to the conclusions of bhakti (bhaktisiddhanta-viruddha), or which contained rasabhasa, conflicting devotional mellows.

Therefore, Svarupa Damodara would examine these things, and if he decided that they were pure, then he would arrange for the Lord to hear them.

Svarupa Damodara would sing for Shri Chaitanya the songs of Vidyapati, Chandidasa, and Gita-Govinda, and this gave the Lord much pleasure.
Svarupa Damodara could sing like a Gandharva, and he knew the scriptures like Brihaspati, the guru of the gods.
No one was a greater soul than he.

He was most dear to Advaita and Nityananda and the life and soul of the devotees headed by Shrivasa Thakura.”

In this way, it is said that Svarupa Damodara was like a second form of Mahaprabhu, in song he was like a Gandharva, and in scripture, he was like Brihaspati.

Svarupa Damodara was very expert in music as well as Vedic scriptures.
Shri Chaintaya used to call him Damodara, becasue of his expert singing and musical skills.
The name Damodara was given by Shri Chaitanya and added to the name given by his sannyasa guru.
He was therefore known as Svarupa Damodara.
He compiled a book of music called Sangita-Damodara.

When anyone wanted to submit a song, a verse, or a book to Shriman Mahaprabhu, they first had to submit it to the examination of Svarupa Damodara, before it would be heard by the Lord.

When Svarupa Damodara came from Kashi, he submitted a verse before the Lord, glorifying Him.
This verse has been recorded by Kavi Karnapura in his Chaitanya Chandrodaya Nataka as follows:

“O Ocean of Mercy, Shri Chaitanya! Let that which easily drives away whatever pain we have been experiencing in this material world; that which is all purifying, that which manifests the greatest transcendental bliss; that which by its sunrise casts away all the doubtful conclusions of the shastra; that which rains rasa on our hearts and minds, rules our consciousness and thus causes jubilation; that all-liberating, all-auspiciousness-giving, the limit of madhurya-rasa mercy of yours-let it arise within our hearts. ”

Shri Svarupa Damodara made his dandavats before the Lord, and the Lord embraced him, saying, “Today I saw in a dream that you were arriving here.
Everything was just right. Just as one who is blind becomes happy getting eyes, so I have become happy upon getting you.”
Shri Svarupa Goswami said, “O Lord! Please forgive me.

Forgetting you, I deserted your lotus feet. Not having a trace of prema within me, I left your service, and being sinful, I went to a foreign land.
But, although I abandoned you, you didn’t abandon me.

By the ropes of your mercy, you have bound me by the neck and dragged me back to your lotus feet.”
Hearing Svarupa Damodara saying these words in great humility, the Lord again embraced him and said, “Shri Krishna is very kind. By his mercy we have met once again.”

In the daytime, Shri Chaitanya Mahaprabhu used to perform kirtan with his devotees.
At night, in the company of Ramananda Raya and Svarupa Damodara, he would relish the truths about the pastimes and mellows of Radha and Krishna.
In the same way that Lalita and Vishakha are the internal confidantes of Shri Radha, Svarupa Damodara and Ramananda Raya are the internal confidantes of Shri Chaitanya Mahaprabhu.

On the second day of the day of full moon in the month of Asharh, Shri Svarupa Damodara Goswami passed away from this earth and entered into the Lord’s unmanifest pastimes.