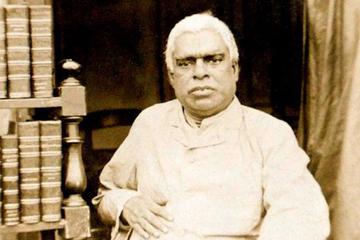 Sri Sacidananda Bhaktivinoda Thakura appeared in 1838 in a wealthy family in the Nadia district, West Bengal. He revealed that he is an eternal associate of Sri Caitanya Mahaprabhu by his extraordinary preaching activities and prolific writing. Living as a, mahabhagavata Vaisnava, he stayed in the grhasta ashram until the last few years of his life. Then he renounced everything, accepted babaji, and entered samadhi, totally absorbed in the loving service of Gaura-Gadadhara and Radha-Madhava.

“He had a responsible government position as the District Magistrate (high court judge), maintained a Krishna conscious family, and wrote almost one hundred books on Krishna consciousness. At the same time, he served the Supreme Lord in so many ways. That is the beauty of his life. After a full day of government service he would sleep four hours, get up at midnight and write until morning. That was his daily program.” (Srila Prabhupada)

Thakura Bhaktivinoda took Vaisnava diksa from Sri Vipinvihari Goswami in the line of Sri Jahnava Mata. Afterwards, he received spiritual inspiration and direction from Srila Jagannatha Dasa Babaji. Holding an exalted government post, vast erudition, and spiritual accomplishment never disturbed Bhaktivinoda Thakura. He remained prideless, always humble, friendly to all. Charity seekers at his home always left happy and satisfied. A well-wisher to everyone, he never kept grudges, even with opponents to his preaching. In fact, he never spoke a word that would hurt another’s feelings.

“The Thakura was always courageous and acted for everyone’s welfare. Keeping personal needs to a minimum, he led the simplest of lives,” said one pandit. In the following entry from Saranagati, Srila Bhaktivinoda, who had all pure divine qualities, takes the role of a conditioned soul to teach us how to advance in Krishna consciousness:

“You should always absorb your mind in attentively chanting Krishna’s glories. By performing Krishna kirtana you’ll gain mastery over the mind. Give up all false pride. Always think yourself to be worthless, destitute, lower and more humble than straw in the street. Practice forgiveness like the tree. Giving up all violence toward other living beings, you should maintain them. Throughout your life you should never give anxiety to others. But do good to them, make them happy, and forget about your own happiness.

“Thus when you become a pious good soul by possessing all good qualities, you should give up desires for fame and honor. And just make your heart humble. Knowing that Lord Sri Krishna lives within all living beings, you should respect and honor everyone at all times. You will attain virtue by being humble, merciful, respecting others, and renouncing desires for fame and honor. In such a state, you should sing the glories of the Supreme Lord. Weeping, Bhaktivinoda submits his prayer at the lotus feet of the Lord. ‘0 Lord, when will You give me such qualities as these?’ ”

Always anxious to use every moment in loving service of Krishna, he followed a strict austere daily schedule:

Srinivasa Acarya praises the six Gosvamis of Vrindavana, nana-sastra-vicaranaika-nipunau sad-dharma samsthakapau, lokanam hita karinau … “The six Gosvamis deeply studied all the sastras in order to establish eternal religious principles for the benefit of everyone.” Similarly, Thakura Bhaktivinoda made unlimited preaching contributions to help humanity. And for this he’s known as the “Seventh Gosvami.”

“His writings have made the sacred teachings of Sri Caitanya Mahaprabhu fully available to every modern reader. And they are presented in a form which carries irresistable conviction and devotion,” said a late disciple of Thakura Bhaktivinoda.

“He who has failed to carefully worship the lotus feet of Sri Radhika, which are the abodes of all auspiciousness. He who has not taken shelter in the transcendental abode of Vrindavana, which is decorated with the lotus flower named Radha. He who in this life has not associated with the devotees of Radhika, who are full of wisdom and love for Radhika. How will such a person ever feel the bliss of bathing in the ocean of Lord Syamasundara’s sublime mellows?

“Please understand this most attentively. Sri Radhika is the teacher of madhurya rasa (mellows of conjugal love). Radha-Madhava madhurya prema is meant to be discussed and meditated upon. He who cherishes the lotus feet of Srimati Radharani obtains the lotus feet of Madhava, which are priceless jewels. Without taking shelter of Radha’s lotus feet one can never meet Krishna. The Vedic scriptures declare that Krishna is the property of the maidservants of Sri Radha. Give up wife, sons, friends, wealth, followers, speculative knowledge, all materialistic actions. Just become absorbed in the sweetness of serving the lotus feet of Srimati Radharani. This is Bhaktivinoda’s solemn declaration.”

During the last five-hundred years, the original appearance place of Lord Caitanya had vanished under the indomitable Ganges River. In 1888, Srila Bhaktivinoda Thakura revealed Sri Caitanya Mahaprabhu’s janmasthana at the Yogapitha in Sridhama Mayapur. Srila Jagannatha Dasa Babaji Maharaja, a famous siddha saint, and paramahamsa rasika Vaisnava, confirmed the Thakura’s discovery. This most auspicious event delighted the Gaudiya Vaisnavas from Gaura-mandala to Vraja-bhumi. He established the worship of Lord Gauranga and Sri mati Vishnupriya at Yogapitha.

In the mood of innovation, in 1896 he sent to universities around the world a book of slokas, Sri Gauranga-lila smarana which had a forty-seven page English introduction: “Sri Caitanya Mahaprabhu: His Life and Precepts.” This act rose from a keen desire to spread Lord Caitanya’s teachings in the Western countries.

His second prediction: “Very soon the chanting of ‘Harinama sankirtana will be spread all over the world. Oh, when will that day come when people from America, England, France, Germany, Russia will take up karatals and mrdangas and chant Hare Krishna in their towns?”

Srila Prabhupada said it’s spiritually significant that he himself appeared in 1896, the same year Bhaktivinoda Thakura sent his book overseas. The will of Lord Caitanya, the desire of Thakura Bhaktivinoda, and the mercy of Srila Sarasvati Thakura empowered Srila A.c. Bhaktivedanta Swami Prabhupada to spread Sri Caitanya’s teachings and the chanting of Hare Krishna all over the world. Prabhupada fulfilled the Thakura’s three predictions!

Devoid of pride, full of humility, radiant with pure love for Radha-Govinda, Srila Prabhupada gave all credit to the previous acaryas. “We should take it,” said Srila Prabhupada, “that Srila Bhaktivinoda Thakura was the origin of the Krishna Consciousness Movement in its pure form.”