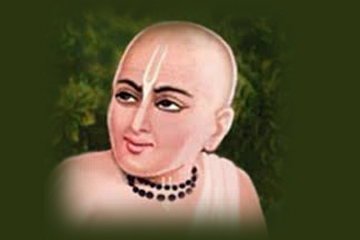 According to some, their maternal uncle’s house was in the village of Buron (or Burangi) in Sylhet (Srihatta). Their father later took up residence at Kumarahatta. After residing there for some time, the three brothers came to live at Navad­vipa.

They were born in the family of uttara-radhiya Kayasthas, and were very intimate associates of Sri Sri Nitai-Gauranga. Srila Bhaktisiddhanta Sarasvati Thakur states that they are immediate expansions of Srimati Radhika’s body.

All three of them composed very sweet songs describing the lilas of Sri Gaurasundar and Sri Krsna. They have particularly described the childhood pastimes of Gaura Hari, His sankirtana pastimes and acceptance of sannyasa, as well as descriptions of the beauty of Sri Nityananda prabhu.

Vasudeva and Madhava were sent with Nityananda to preach in Bengal. Govinda stayed for some time with Mahaprabhu at Nilacal.

Every year they would come to Puri to see Mahaprabhu and perform kirtana during Ratha-yatra. Later in life they took up residences at different places. Sri Govinda lived in Agradvip, Sri Madhava in Dainhat and Sri Vasudeva in Tamluk.

When Mahaprabhu set out for Sri Vrindavana from Nilacal with His devotees, Govinda Ghosa was also present. There is an incident described by one Acyutacarana Caudhuri. One day, Maha­prabhu, after accepting his noon meal, extended his hand, thus requesting some hari-taki (dried fruit which aids in digestion). Govinda immediately ran out to bring some from some householders in the village near where they were staying.

The next day when Mahaprabhu similarly extended His hand after lunch, Govinda again placed in it some hari-taki. Mahaprabhu looked at him and inquired as to how he was able to provide it so quickly whereas yesterday it had required some time to bring. Govinda replied that he had kept some for Mahaprabhu from yester­day. Mahaprabhu said that since he was saving things he should remain in that village and, becoming a householder, he should worship Sri Gopinathaji there.

As per the order of Mahaprabhu, Govinda began to worship Gopinathji, and after marrying he had a son who would also assist him in the worship of the Deity. But his wife and then later his son passed on to the next world. Govinda became very sad. In a fit of anger he lay down on his bed. He didn’t cook anything that day, neither he ate anything, neither did he offer anything to Gopinathaji. In the night, Gopinatha came and began to massage Govinda’s legs. Then He asked him, “I don’t understand your intelligence. One of your sons dies, and you decide, “Whats the point in feeding the other one – let him die also.”

Govinda replied, “I don’t know what you’re talking about. I had only one son.”

“Am I not also your son? You are feeding Me and taking care of Me as your son. Now when I am dependent on you, you decide to neglect Me all together.”

“Well, anyway, now there’s no one to perform my sraddha and the offering of pinds to my forefathers. Will You do that?”

“Yes, I can do it. Why not? So now will you give Me something to eat?”

Having heard Gopinatha’s reply, Govinda was very happy and got up to prepare an offering. To this day, the Deity dresses in a plain white cloth and with a kusa grass ring on His finger, He offers pinda on the disappearance day of Govinda Ghosa Thakura. Gopinathaji’s temple is a rickshaw ride away from Agradwip railway station on the Navadwip-Katwa line.

In this connection, there is a story. When Vasudeva Ghosa received the news of Mahaprabhu’s departure from this world, he promptly proceeded to dig his own samadhi, and then sat down inside it, to wait for his final breath. Mahaprabhu then appeared there, and with one hand He offered His benediction, and with the other indicated that Vasudeva should get up out of the hole.