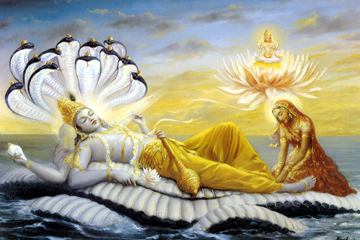 The fantastic glories of Putrada Ekadasi are told in the Bhavisyottara Purana, they cannot be vilified by any means. This Ekadasi occurs in the waxing moon of the month called Magha (December/January).

Sri Krsna said to Maharaj Yudhistira: “Oh my dear King, the Putrada Ekadasi is very great; It’s power is incalculable. Anyone who practices penance by abstinence of eating on this day, receives immeasurable benediction from the Personality of Godhead. All ones sinful reactions are eradicated and great wealth, fame and sagacity await with folded palms, eager to serve one who observes this Ekadasi.

“There was once a great city named Bhadravati, and a revered King named Suketumana ruled that land. His principle queen was Saivya and she was exquisitely beautiful. Despite being surrounded by great material opulence the maharaja was despondent, for they had no son. The King and Queen spent much time performing religious activities, with a hope to one day conceive an heir.

“Because they were afflicted with great sorrow and misfortune, their tempers grew hot and their brains boiled with furious agitation for the chance to have a son. As a result their offerings were always hot. Meanwhile the Kings forefathers also worried and aggrieved by the inauspicious atmosphere, thought thus: “If there are no offspring there will be no one to offer oblations to us and deliver us from pitrloka.”

“King Suketumana could feel the anxiety of his forefathers and grew ever increasingly determined to fulfil his obligation to them and beget a son. He also grew more and more morose, however. He found no pleasure in his sports or recreations; he lost the taste for hunting, found no pleasure in the music of the courtiers, and he even became recluse from his friends and well-wishers. Merged in a fathomless ravine of staggeringly embarrassing hopelessness, the maharati King considered his life useless.

“He thought that, without a son there would be no way of alleviating the debts to the demigods, forefathers and future generations. Without being favoured by Sri Visnu one cannot conceive a child, amass wealth or retain knowledge. Upon finding zero solace in his court the King left for the forest riding on a gleaming white horse.

“King Suketumana entered the mighty forest that lay on the edge of his kingdom, surrounded by a chorus of many birds. Unbeknown to him, many wild beasts and cats silently watched him enter the eerie place; so quiet and still with moss. As the lonesome King passed deeper and deeper into the wood, he passed many great trees. He saw Pipala and Date, Tamarind and Palm, Shal and Maulsiri, Saptaparna and Sarala, Tilak and Tamala and many others. Entering a clearing he came before a mammothian Banyan tree, with branches springing up here, there and everywhere. Hiding on, among and around the branches he saw many wild animals such as Snakes, Elephant, Deer, Monkeys, Wild Boar, Leopards, Tigers and Lions.

“The king became frightened by the racous howls of fearsome jackal packs and the plaintive hoots of nightbound owls. Wandering in this way through the wet wilds, he thought thus: “I have performed so many sacrifices, fed many brahmanas still I am suffering; what sacrifice can there be to free me from my rueful plight.”

“Suddenly he came across a brilliant lake with many cakora birds, swans and chakravaka sporting upon it’s crystalline waters. The vision was easily as lovely as Kusuma Sarovara. On seeing many sages chanting mantras on the banks of this lake, King Suketumana approached them and offered obeisances to each of them in turn. The sages, being pleased with the Kings humility spoke thus: “Oh dear King, we are very satisfied with your stately respects and devotions and are prepared to assist you in your troubles. Please ask a benediction of us!”

“The King Said, “Who are you, why have you come to this place? I am a King bereft of a son and therefore my whole kingdom seems void. How can I get a son and thereby mitigate the suffering of my citizens.

“The sages replied, “We are Visva devas, we come here regularly to take bath in these sanctified waters. Today is Putrada Ekadasi, anyone who observes this Ekadasi pleases Sri Visnu to great ends and has all his material and spiritual desires fulfilled. If one desires a son, he will assuredly get one by following this Ekadasi vrata.

“The king recounted: “I have observed many sacrifices for getting a son, yet none have been sucessful. Please bless me, so that I may be fortunate and receive my hearts desire, a son and heir to the throne.

“Simply observe this Ekadasi with great care and attention.” Replied the sages

“Give up eating on this day, remain awake and chant the glories of Hari, by the mercy of Godhead you will conceive a son.

“Thereafter, the King observed Putrada Ekadasi. He broke fast the next day and after offering many respectful obeisances unto the sages, he returned to his Kingdom. I due course of time Queen Saivya became pregnant. By the influence of Putrada Ekadasi and the blessings of the sages, the King begot an intelligent and pious son. Thereafter the King happily ruled his Kingdom and his forefathers became pleased.

Lord Krsna continued, “Oh King Yudhistira, anyone who observes Putrada Ekadasi can get a son and attain the heavenly planets. Anyone who simply hears or sings the glories of this Ekadasi certainly achieves the result of performing an Asvamedha sacrifice.