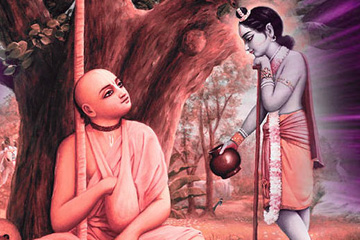 Srila Madhavendra Puri appeared in the 14th century. He was a guru of the Brahma or Madhva sampradaya, one of the four (Brahma, Sri, Rudra and Sanaka) Vaishnava lineages that purify the world in the age of Kali.

At the time of his departure from this world, Madhavendra Puri was completely absorbed in separation from Krsna and constantly repeated one sloka. This verse is considered by Gaudiya Vaishnavas to be the essence of expression of the mood of separation.

Madhavendra Puri’s disappearance day is the sukla dvadasi of the month of Phalgun.

“Madhavendra Puri was a well known sannyasi of the Madhva sampradaya. His grand-disciple was Sri Chaitanya Mahaprabhu. Prior to his appearance, there was no evidence of prema bhakti in the Madhva line. In his verse, ayi dinia-dayardra-natha (Chaitanya Charitamrita 2.4.197), the seed of the religious doctrines of Chaitanya Mahaprabhu can be found.”

“Madhavendra Puri was the fist shoot of the desire tree of divine love that came out of the Madhva lineage. Prior to his appearance, there was no sign of the conjugal mood of devotion in the Madhva line.The feeling of separation from Krishna, or transcendental vipralambha is the only practice by which the spirit soul can achieve perfection. Material feelings of separation give rise to a despondency that reveals the attachment one has for matter, whereas the despondency that results from the feelings of separation for Krishna are the best proof of one’s desire to bring pleasure to His senses. The desire to bring pleasure to Krishna’s senses shown by Madhavendra Puri, the great soul who is the root of this movement, is the ideal example to follow for anyone who wishes to serve the Lord. It is especially worth remarking that Mahaprabhu and His closes followers later adopted this example and made it their standard.”

“Once Sri Madhavendra Puri traveled to Vrindavana, where he came upon the hill known as Govardhana. Madhavendra Puri was almost mad in his ecstasy of love of Godhead, and he did not know whether it was day or night. Sometimes he stood up, and sometimes he fell to the ground. He could not discriminate whether he was in a proper place or not. After circumambulating the hill, Madhavendra Puri went to Govinda Kunda and took his bath. He then sat beneath a tree to take his evening rest.

“While he was sitting beneath a tree, an unknown cowherd boy came with a pot of milk, placed it before Madhavendra Puri, and, smiling, addressed him as follows, ‘Please drink the milk I have brought. Why don’t you beg some food to eat? What kind of meditation are you undergoing?’
“When he saw the beauty of that boy, Madhavendra Puri became very satisfied. Hearing His sweet words, he forgot all hunger and thirst.
“Madhavendra Puri said, ‘Who are You? Where do You reside? And how did You know that I was fasting?’

“The boy replied, ‘Sir, I am a cowherd boy, and I reside in this village. In My village, no one fasts. In this village a person can beg food from others and thus eat. Some people drink only milk, but if a person does not ask anyone for food, I supply him all his eatables. The women who come here to take water saw you, and they supplied Me with this milk and sent Me to you. I must go very soon to milk the cows, but I shall return and take back this milk pot from you.’

“Saying this, the boy left the place. Indeed, He suddenly could be seen no more, and Madhavendra Puri’s heart was filled with wonder.

“After drinking the milk, Madhavendra Puri washed the pot and put it aside. He looked towards the path, but the boy never returned. Madhavendra Puri could not sleep. He sat and chanted the Hare Krishna maha-mantra, and at the end of the night he dozed a little, and his external activities stopped. In a dream Madhavendra Puri saw the very same boy.

“The boy came before him and holding his hand, took him to a bush in the jungle. The boy showed Madhavendra Puri the bush and said, ‘I reside in this bush, and because of this I suffer very much from severe cold, rain showers, winds, and scorching heat. Please bring the people of the village and get them to take Me out of this bush. Then have them situate Me nicely on top of the hill.’

“‘Please construct a temple on the top of that hill,’ the boy continued, ‘and install Me in that temple. After this, wash Me with large quantities of cold water so that My body may be cleansed. For many days I have been observing you, and I have been wondering. ‘When will Madhavendra Puri come here to serve Me?’ I have accepted your service due to your ecstatic love for Me. Thus I shall appear, and by My audience all fallen souls will be delivered. My name is Gopala. I am the lifter of Govardhana Hill. I was installed by Vajranabha, and here I am the authority. When the Mohammedans attacked, the priest who was serving Me hid Me in this bush in the jungle. Then he ran away out of fear of the attack. Since the priest went away, I have been staying in this bush. It is very good that you have come here. Now just remove Me with care.’” (Caitanya Caritamrita Madhya 4.21-43).

Madhavendra then went to the place where this boy instructed him to go and found the Gopala Deity. A grand installation was held for Sri Gopala. What is left of the temple that He was worshiped in can still be seen on the top of Govardhana Hill, not far from Sankarsana Kunda