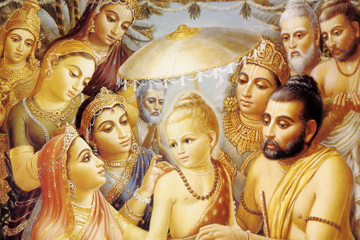 Lord Vamanadeva appeared within this world from the womb of Aditi, the mother of the gods. He appeared at midday on the shravan-dvadasi, the 12th day of the lunar month of Shravan when the moon is waxing.
There are many lessons for Vaishnavas to learn from the narration of His activities, as found in the 8th canto, 18th chapter of the Bhagavat Purana (Srimad Bhagavatam). Amongst the lessons are these:

2. That all other gods are meant to offer homage to Him. They did this when, appearing as a young child, he was awarded the sacred thread by Brihaspati, the guru of the gods. The sun god gave Him the Gayatri mantra and His father, Kasyapa Muni, a straw belt. Mother Earth gave Him a deerskin and Lord Brahma gave Him a waterpot. Kuvera, the heavenly treasurer gave Him a monk’s begging bowl, and the wife of Lord Shiva gave Him the first alms. In this way, the gods all offered the best of what they had to the Supreme God. Each of us, in our own way, must also give the best of what we own – our talents, intelligence, words and wealth – as a gift to that same God. He gave it to us along with our birth, and we can offer ot back to Him.

3. Upon seeing the lad from a distance, King Bali noticed his remarkable sun-like effulgence. He welcomed Him and washed His feet. Thinking of himself as a great proprietor of the Earth, Bali then asked Vamanadeva what He would like to be given in charity, as this was the custom of the king. Vamana replied that He only wanted three paces of land, as measured by His own short steps. The king smiled at the thought of such a small request. He was soon to discover that just as God comes in disguise, so His requests to us are often disguised as simple acts of devotion. Many people smile at the thought that God asks us for only three words: Hare, Krishna, and Rama, spoken as a mantra. But as we speak those three small words we begin to realise that He is changing our life forever from within our hearts.

5. Bali Maharaja’s guru, Sukracarya. was perceptive enough to understand what was happening, who the young boy was, and what was about to happen. But he counselled the king to deny the request, even though he knew that it was Vishnu Himself asking. Thus Sukra was an atheist, even though learned in the Vedas. Such a guru, who stands in the way of his disciple’s emancipation, is fit to be rejected.

6. Bali turns to his guru and says that telling lies, or not keeping a promise once spoken, is the most sinful act. He explains that Mother Earth once said: ” I can bear any heavy thing except a person who is a liar.” Therefore, a person living according to dharma must scrupulously avoid lying.

7. He explains that the opportunity to give in charity to a qualified, saintly person is very rare. It must never be regarded as a time of loss, but as a moment when auspiciousness is drawn towards the giver. When we give we don’t lose, rather God – and the universe – gives us even more in return.

8. Sukra curses his own disciple, thus revealing the actual relationship that sometimes exists between an official religious priest and a member of the faith.

9. Vamana responds to Bali’s promise by expanding his size. Although God may appear as a child, He is the oldest of the old, the immeasurably largest of all large things, and the most powerful of all. This lesson would later be learned by Lord Brahma, who tested the Lord’s power when He appeared as child Krishna. God is also the ultimate owner of everything since everything emanates from Him.

10. Vamana takes His first two steps which, due to His size, encompass the entire cosmos. When He asks where He should place his third promised step, Bali realises that there is only one thing left to give Him – his very self. The king surrenders fully to God at that moment. The surrender of Bali, although offered in a moment of abject desperation, is nonetheless to be emulated by all of us. We don’t own countries, but we do regard ourselves as proprietors of our domestic domains. Most of these, in truth, never quite belong to us legally, and in the grand scheme of things we can claim no factual ownership at all. Death will come very quickly and take everything away from us, so better to give it all to God now. We do this by dedicating everything we own to His service. The result? Curiously enough, the same result that Bali achieved: that we are given everything back and that God draws us nearer to Him and His eternal abode