What are the different types of liberation?

Home/Blog/What are the different types of liberation?

What are the different types of liberation?

Everyone on the path of spirituality is familiar with the concept of liberation. The treatise of the Six Goswamis of Vrindavan deal in great depth with the various concepts of liberation. In this article we will compare the most prominent 5 forms of liberation. 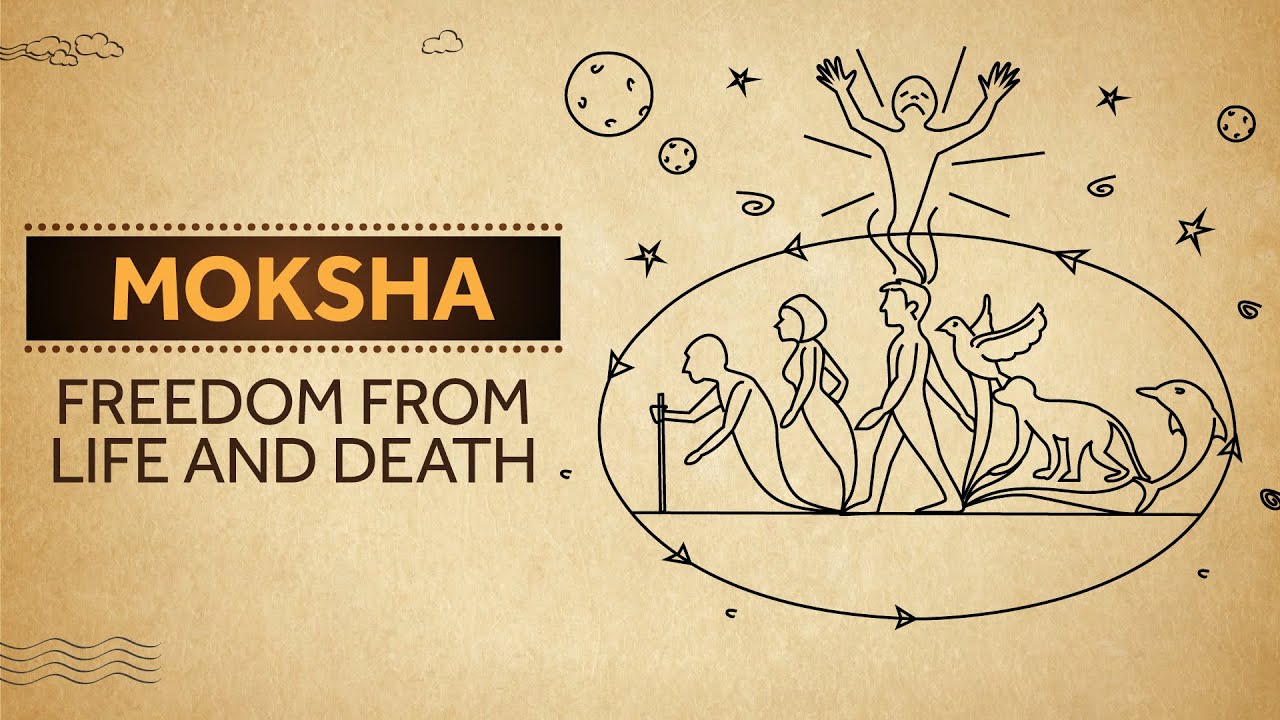 In Vedic scriptures the world is referred to as ‘Samsara’. This term has been extensively used in Vedic, Buddhist and Jain texts, as well as in Yoga treaties. It describes a beginningless cycle of birth, life and death. This vicious circle has also been considered the cause of all suffering.

It is further explained that a soul or living entity is eternal (Sat), knowledgeable (Chit) and blissful (Ananda) by composition. But as soon as this soul takes birth it is forced to occupy a material body such as plant, animal, insect, human being or demi-god. Due to ignorance the soul considers that body as itself and everything associated with that body as its own. This false attitude of ownership leads to pain and suffering. It can thus be concluded that liberation or Nirvana or Moksha is freedom from this ‘Samsara’ – the beginningless cycle of birth, suffering and death.

Where does one go after liberation from Samsara?

This world has been designed as a place of suffering for all those people who want to claim supremacy over other people. Therefore, we can see that often one country is trying to colonize another country or a multi national company is trying to exploit its employees or a person is trying to buy a bigger car than one’s neighbour.

So a person who is no more interested in exploiting nature, people or religion for one’s own personal enjoyment is a candidate for liberation. Such a person goes to the Kingdom of God or Vaikuntha.

The Kingdom of God has been described in almost all modern and ancient schools of philosophy such as Christianity, Vaishnavism, Sikhism, Buddhism, Jainism, Islam, Judaism, etc. Each tradition borrows the basic premise from Vedic Scriptures and then supplements it with certain revelations that are defined by the time, place and circumstances that are unique to the tradition. Hence, liberation is of primarily 5 types based on these unique definitions of the ultimate destination of a living entity or soul.

What are the various kinds of liberation?

“A pure devotee does not accept any kind of liberation — sālokya, sārṣṭi, sāmīpya, sārūpya or ekatva — even though they are offered by the Supreme Personality of Godhead.” 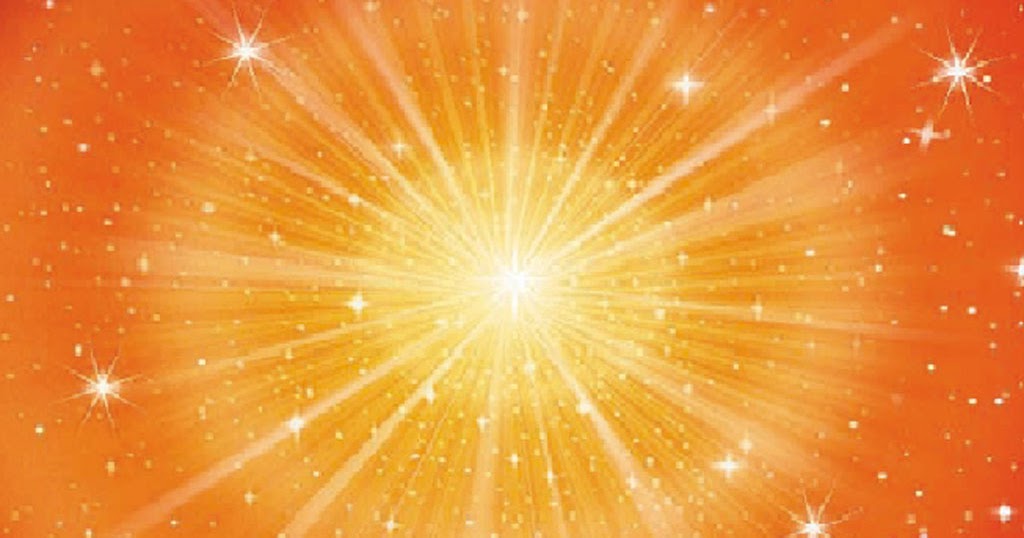 The mental speculators, meditators and impersonalists desire to eliminate their own existence and merge with the existence of God. Such people perceive existence to be morbid and do not see the possibility of an existence that is pleasant. They believe that if material existence is a source of suffering, it is better to stop all existence.

Such people after achieving liberation merge in the spiritual rays that are emanated from the body of Lord Krishna. There is absolutely no interaction in this kind of liberation – neither between the Lord and the soul nor among the various individual souls.

We are all spiritual sparks or souls and by composition we are always active. One can observe this while sleeping also, even though the body is at rest, the soul can travel far and wide through the mind during that sleeping stage. Due to this want of activity the soul ultimately comes back to the material world from the Ekatva liberation and hence it is a temporary form of liberation. 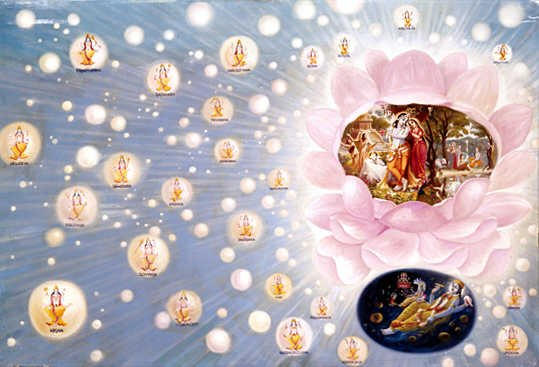 The second kind of liberation is called ‘Sa’-’Lokya’ or same residence. Lord Krishna is simultaneously manifest in different spiritual forms. All these forms are absolutely supreme and occupy special unique spiritual planets.  In this kind of liberation a devotee is promoted to one such planet where one may live with the Lord. The destination planet depends upon the form of Lord that is worshipped by the devotee.

In the third type of liberation, the opulence of a devotee becomes equal to the Supreme Lord. This opulence is generally of 6 types – beauty, wealth, strength, knowledge, and renunciation.

‘Samipa’ is a sanskrit word meaning ‘Close Proximity’. In this kind of liberation a devotee has the great fortune of being in personal association of the Supreme Lord.

In the fifth and the final type of liberation a devotee develops bodily features which are exactly similar to the bodily features of the Supreme Lord. It is imperative to note here that 2 or 3 symptoms that are unique to the transcendental body of the Supreme Lord and cannot be exhibited by a Devotee. For instance, the hair on the chest of the Lord distinguishes Him from His devotees.

What liberation is the best?

A pure devotee of Lord Krishna such as His Divine Grace A.C. Bhaktivedanta Swami Srila Prabhupada, the Founder Acharya of ISKCON, does not accept even these 5 liberations. Even if the Lord Himself offers these magnanimous spiritual gifts a devotee does not aspire for them, what to speak of material happiness. In this regard Prahlada Maharaja has famously remarked, “My Lord, my father achieved all sorts of material benedictions, and all men, women and even the demigods were afraid of him, yet, in a flash, You have killed him and all his material opulence.”

A devotee simply desires to serve the Supreme Lord. That is his highest happiness. Lord Caitanya instructs us how to execute pure devotional service or ‘Prema–Bhakti’ for the Supreme Personality of Godhead in the following verse:

“O Supreme Personality of Godhead Lord Krishna, I do not wish to gain from You any wealth, nor do I desire to have a pretty wife, nor do I want to have many followers. All I need from You is that life after life I may remain a pure devotee at Your lotus feet.”

Clearly Lord Caitanya emphasises, “in life after life,” indicating that a pure devotee of Lord Krishna does not even desire the cessation of the vicious cycle of birth and death. The yogīs and empiric philosophers desire cessation of the process of birth and death, but a devotee is satisfied even to remain in this material world as long as he has the opportunity to execute the Devotional Service of Lord Krishna.